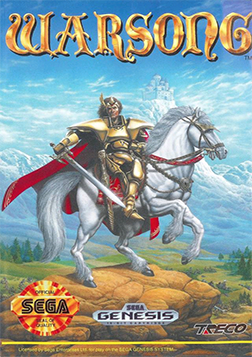 Warsong, known as Langrisser (ラングリッサー) in Japan, is a tactical role-playing game developed by Nippon Computer Systems (NCS). The first in the Langrisser series, it blended tactical warfare with RPG elements, similar to the Fire Emblem series. It was initially released for the Mega Drive/Genesis console and the PC Engine (in Super CD-ROM² format) , the former version being published by Treco in America. The PC-Engine version was released under the title, Langrisser: The Descendants of Light. It was later re-released along Der Langrisser (a remake of Langrisser II) in a compilation for the Sega Saturn and PlayStation. That compilation was released for the PlayStation Network in 2009.

The storyline follows the armies of Prince Garett of Baltia as they battle the Dalsis Empire and the monsters they unwittingly awaken, framed as a battle between the forces of good and an ancient evil that threatens to overrun the world.

The story begins with an assault on the Nation of Baltia by the forces of the Dalsis Empire. King Alfador sees the castle will not be able to stand and urges his son Prince Garett to flee to the town of Sulras, both for his own safety and to gather reinforcements from Duke Carleon. He assigns the sword master Baldarov to go with Garett and protect him on the journey.

Together they escape from the siege and journey to Sulras, meeting the cleric Mina on the way. The three of them help defend the town from a bandit raid in the night, and are granted some reinforcements by Duke Carleon. Before they can start the journey back, Sabra, one of Baltia's commanders, arrives to tell them that the Castle has already fallen to Dalsis and many of the other commanders have been taken prisoner. As he returns to the castle he is set upon by monsters in the woods, but he perseveres and eventually arrives at the castle. He leads a campaign to retake the Castle, freeing the prisoners. However, Dalsis has already taken the treasure Baltia was protecting, the magic sword "Warsong".

Garett then rushes to the aid of Anzel, one of Baltia's fortresses, which is also under siege. He rescues the fortress' commander Bayard, and begins his march through the Dalsis Empire towards Emperor Pythion's palace. Duke Carleon himself commits to the cause, joining the fight by Garett's side. The monsters that are encountered as they travel into Dalsis continue to become more vicious, numerous, and powerful as time goes by, and Garett realizes they are attacking the Dalsis forces as well as his own. He arrives at the palace and defeats Emperor Pythion, and the emperor explains that he awakened the ancient evil with Warsong.

Garett retakes Warsong and begins his campaign against the evil, fighting ever more powerful monsters along the way and eventually tracking their source to the dark land of Seneferia. He finally gains access to a citadel in Seneferia that is the home of the ancient evil, and deep within the citadel he fights the embodiment of that evil, Chaos.

After slaying Chaos, the defeated being admonishes Garett by explaining that Order and Chaos were created by the world itself and Chaos was revived to help save the world from destruction by keeping it in balance. Chaos also says that it will return as long as humans continue to fight one another. The citadel then sinks into the ground as Garett and friends escape, and Garett wonders whether they have actually saved the world, or set it on the path to ruin.

The player controls a group of heroes or commanders to accomplish some goals each phase. They are joined with non-controlled allies to battle with enemies commanders. Before each phase, the player can purchase up to eight army units from a single type for every one of its heroes. The type of the available army depends on the hero class (e.g. Griffons can only be purchased by Dragon Knights) and have different prices. At the end of each phase, any survivor army provides some amount of cash for the player to use next time.

After each battle, the winning commander gains experience that allows him to upgrade to a more powerful class. If a hero dies, he is lost forever.

During the game, you slowly acquire ally leaders, each of whom can hire up to 8 troops (each troop representing 10 soldiers) to fight in stages called Scenarios. Each scenario starts you out in a defensive position with enemies nearby and a goal to accomplish. Typical goals are, "Protect this person", "Destroy all the enemies", "Destroy the enemy leader (other enemies optional)" and several other types. You chose where to place your troops in the beginning, and the formations you want to fight in.

Along the way, you also acquire special items that can increase the power of your commanders. As your commanders gain experience, they can be promoted to different "classes" with new spells, and new abilities.