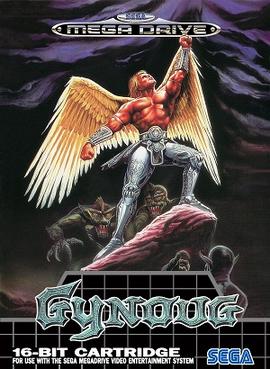 Gynoug (ジノーグ Jinōgu), known in North America as Wings of Wor, is a 1991 scrolling shooter video game developed by Masaya and published by NCS Corporation for the Sega Genesis. The game was released in North America and Europe in 1991 and in Japan on January 25, 1991, and re-released on the Wii Virtual Console exclusively in Japan on May 20, 2008. The game sprites were designed by the sprite designer of legendary shooting title Cho Aniki, a game best known for its homoerotic overtones, wacky humor and vivid, surreal imagery.

The heavens are being attacked by the demons of Iccus, led by a being known only as the Destroyer. The angel Wor must bring the fight to Iccus itself and put an end to the Destroyer's dark plans.