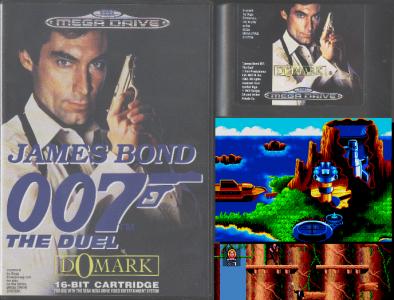 James Bond 007: The Duel is a 1993 action video game featuring the character of the British secret agent James Bond. It was developed by The Kremlin and published by Domark for Sega's Mega Drive/Genesis and Master System video game consoles, and the Game Gear handheld game console. The Mega Drive version was also released in Japan by Tengen on 14 May 1993, under the title known as 007 Shitō (００７・死闘).

The famous Agent 007 must stop a crazy professor who has the same old dream as everyone else: world domination. He will have the trusty Walther PPK and must go through a few levels with a villain at the end of each.

James Bond 007: The Duel is a platform side-scroller which requires precision in jumping (Bond will easily die if he falls from high places) and shooting (the player will have to learn to preserve ammo and reload the pistol without being shot at). The player will have to find all women hostages and disarm bombs in each level to proceed. Hostages will give the player extra lives and ammo.