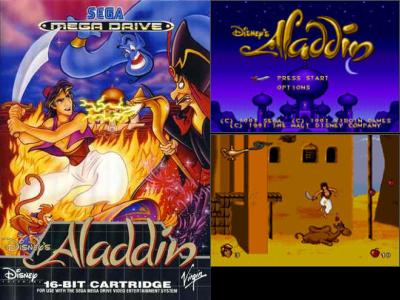 Disney's Aladdin (アラジン Arajin) is a platform video game developed by Virgin Games and Disney Software based on the 1992 film of the same name. The game was released for the Sega Genesis in November 1993, and was later ported to MasterSystem, Amiga and MS-DOS computers the following year. The NES and the Game Boy received a reworked port. It is one of several video games based on the film, including another game that was released in the same month by Capcom for the Super Nintendo Entertainment System.

The player controls Aladdin, who must make his way through several levels based on locations from the movie: from the streets and rooftops of Agrabah, the Cave of Wonders and the Sultan's dungeon to the final confrontation in Grand Vizier Jafar's palace. The Sultan's guards and also animals of the desert want to hinder Aladdin in his way. He can attack either close range with a scimitar, which can deflect certain projectiles, or long range with a limited supply of apples. Next to apples, Aladdin can also collect gems which can be traded for lives and continues from a traveling peddler. Finding Genie or Abu icons enables bonus rounds. The Genie bonus round is a game of luck played for apples, gems or extra lives, and continues until the player runs out of Genie tokens or lands on Jafar. In Abu's bonus round, the player controls the little monkey who has to catch bonus items that fall from the sky, but without touching any of the unwanted objects like rocks and pots.

Disney's Aladdin was developed for the Mega Drive by Virgin Interactive's studio of Virgin Games USA and published by Sega in 1993. This was due to the fact that Sega had both obtained a license for publishing video games based on Disney's motion picture and established a collaboration deal with Disney's feature animation studio (a first in the video game industry), so Sega of America tasked the Virgin Games USA development team with the programming duties because of their successful previous efforts with McDonald's Global Gladiators and 7 Up's Cool Spot. The game has been noted for its use of traditional animation, which was produced by Disney animators under the supervision of Virgin's animation staff, including animation producer Andy Luckey, technical director Paul Schmiedeke and animation director Mike Dietz, using an in-house "Digicel" process to compress the data onto the cartridge. The game also featured some musical arrangements from the film, along with original tracks composed by Donald Griffin and Tommy Tallarico.

The Amiga and PC versions (DOS) were based on the Mega Drive/Genesis version, featuring enhanced music and sound effects. The Nintendo Entertainment System received a port as well, which was later adapted into a Game Boy version, which was compatible with the Super Game Boy and Game Boy Color.

A Game Boy Color port was developed by Crawfish Interactive and published by Ubisoft on November 7, 2000.